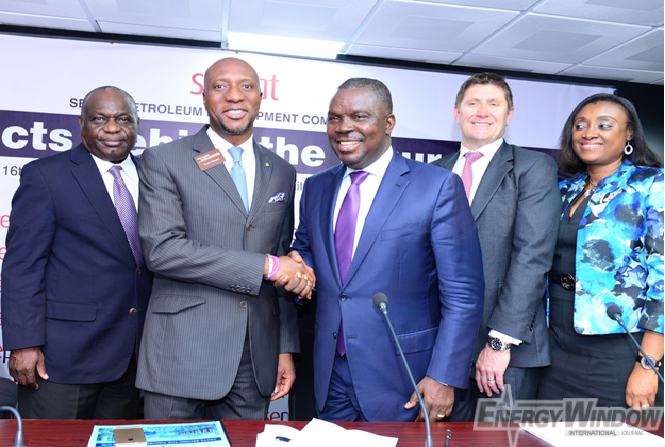 SEPLAT Petroleum Development Company Plc, a leading Nigerian independent oil and gas exploration and production company has presented its “facts behind the figures” for its audited full-year 2015 results at the Nigerian Stock Exchange.

Presenting the details of the company’s full-year 2015 performance, ahead of its Annual General Meeting scheduled for 1 June 2016, the CEO Austin Avuru, and Roger Brown, Chief Financial Officer said the company’s working interest 2P reserves at the end of 2015 increased 71% year-on-year to 480 MMboe, with a further 98 MMboe recognized as 2C resources. Total reserves were reported as 578 MMboe, with average working interest production in 2015 at 43,372 boepd, ahead of guidance and up 41% year-on-year. Oil and condensate production accounted for 29,003 bopd, up 20% year-on-year, with natural gas production hitting 86 MMscfd, up 119% year-on-year, and all of the natural gas production was supplied to the domestic market.

In a significant step forward for its gas business, during mid-year 2015, SEPLAT successfully completed and commissioned the Oben gas plant phase I expansion. This expansion saw the Company’s overall gross processing capacity double to 300 MMscfd. The Oben gas plant phase II expansion is underway with additional processing modules ordered. Once installed, the additional processing modules will take gross processing capacity to an expected minimum level of 525 MMscfd. Alongside the significant increase in gas production, the positive financial impact of SEPLAT’s gas business was evident as revenues from gas sales increased 185% year-on-year to US$77 million.

Although production was up year-on-year, the significantly lower oil price realization and downtime of third party operated infrastructure adversely impacted revenue, more than offsetting the increased contribution of the gas business. Consequently, gross revenue for the full-year stood at US$570 million, down 26% year-on-year. Net profit for 2015 stood at US$67 million and cash flow from operations before movements in working capital stood at US$190 million against capital investments of US$152 million. Cash at bank and net debt at year end stood at US$326 million and US$573 million, respectively. At the end of 2015, the net NPDC receivables balance stood at US$435 million, down from US$463 million at the end of 2014. Further receipts post period end have reduced the net NPDC receivables balance to a current level of around US$350 million. The Board of Directors of SEPLAT is recommending a final dividend of US$0.04 per share, bringing the total dividend payment for 2015 to US$0.08 per share. Subject to the approval of the shareholders, the final dividend will be paid on or shortly after the AGM, which is scheduled to hold on 1 June 2016 in Lagos, Nigeria.

Looking ahead throughout 2016, the Company has set full year production guidance at 41,000 to 48,000 boepd and expects its capital expenditures to be around US$130 million.

Commenting on the Company’s 2015 results, Austin Avuru said, “In 2015 we delivered on what was in our control, posting best-in-class reserves and production growth and taking our gas business across a transformational threshold with further expansion still to come. We acted quickly and decisively in response to the weak oil price environment, adjusting our work programme and cost structures”, he said.

“Against a bleak industry backdrop”, he went further, “we remained profitable with a strong balance sheet underpinning us. Having started the year strongly, our 2016 full year production expectation has been impacted by the current shut-in of the Forcados terminal. However, we are much better positioned to withstand such interruptions than in prior years”, he noted.

“Our gas business”, he explains, “takes on additional importance by providing a continuous revenue stream that is de-linked from the oil price. Our enlarged portfolio offers us the scope for greater diversification. Finally, I would like to re-emphasize that our strong focus remains on protecting the business and managing value through effective cost reductions, optimizing operations, deleveraging and strengthening the balance sheet. This will strategically position the Company to take advantage of opportunities that will inevitably follow this current downturn.”