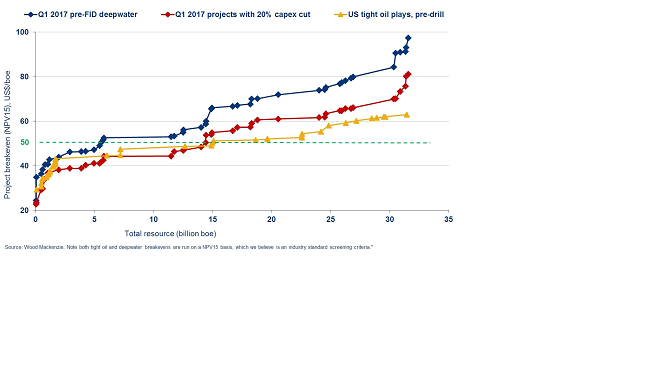 The game is changing, the deepwater industry is emerging from the downturn, says the global industry analysts, Wood Mackenzie, with the most attractive projects that will not only compete with the US tight oil plays otherwise called Shale oil, but also push it to a tighter corner.

The group reaffirms that 2017 will see a noticeable pick-up in deepwater project sanctions, with three projects namely, Mad Dog Phase 2, Kaikias and Leviathan which is already fully approved.

The group also estimated that on average, the global deepwater project costs had fallen just over 20% since 2014. Assuming a 15% internal rate of return hurdle (NPV15), 5 billion barrels of pre-sanction deepwater reserves now breakeven at US$50/boe or lower.

Woods also pointed out that there are, comparatively, 15 billion barrels of tight oil resource in undrilled wells with break evens of US$50/boe or lower at a 15% hurdle rate. Adding however that the playing field between tight oil and deepwater will get a lot more level. There is still, they posited, considerable scope to drive deepwater break evens lower through leaner development principles and improved well designs, but in tight oil according to them, cost inflation is back with a vengeance.

It further estimated that a further 20% cut in current deepwater costs would bring 15 billion barrels of pre-FID reserves into contention, on par with tight oil. The deepwater value proposition will strengthen as tight oil cost inflation returns, they maintained. Noting that a 20% rise in tight oil costs would mean that the two resource themes effectively have the same opportunity set measured by volume in the money at US$60/boe.

Angus Rodger, the group’s Asia-Pacific upstream research director has this to say: “We are at last beginning to see the first signs of recovery in deepwater, driven primarily by cost reduction and portfolio high-grading. Projects in the US Gulf of Mexico in particular have made significant strides, with many reducing NPV15 break evens from above US$70/boe to below US$50/boe.

“This is not just a result of cheaper rig day rates. Of far greater impact are the steps the industry in the Gulf of Mexico and elsewhere have taken to re-evaluate project designs and improve well performance. We are now seeing scaled-down projects emerge with less wells, more subsea tie-backs, and reduced facilities and capacities – and this all translates into lower break evens.”

They were equally of the opinion that the slowdown had changed the structure of the deepwater industry. While it is slowly getting leaner, it is also getting smaller, they said. For them, over 70% of the 45 pre-FID projects targeting sanction over the next few years are operated by just eight companies – Brazil’s Petrobras and the seven majors (ExxonMobil, Chevron, Shell, BP, Total, Eni and Statoil). This is due to the exit of many independents from the sector because of either cost pressure or a re-allocation of capital to tight oil plays.

In a capital-constrained world, according to their hypothesis, fewer operators inevitably means less deepwater projects flowing through to sanction. Only the most cost-competitive projects and regions will attract new investment.