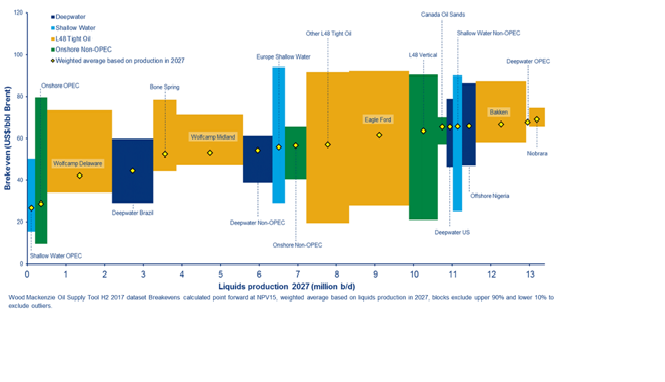 “You can’t eat your cake and have it” is one old aphorism that now seem to be making so much meaning in the global oil and gas industry at the moment.

It is trite knowledge that the surge in tight oil production from the US over the last few years triggered a dimension that compelled conventional oil producers to take a quick reverse and review aimed at optimizing operations toward competing favourably in the prevailing low cost crude oil regime.

New research from global natural resources consultancy Wood Mackenzie has indicated that while the price crash was painful for conventional producers, they have made gains because, according to them, many conventional pre-Final Investment Decision (FID) projects are now competitive with Lower 48 breakevens.

In a press release made available to Energy Window International, the Senior Analyst, Global Oil Supply, at Wood Mackenzie Harry Paton said: “We have seen encouraging signs of improvement in conventional project breakevens. Costs have come down significantly since 2015. And the number of deepwater FIDs taken at the end of 2017 indicates a mood of quiet optimism in the upstream sector.”

He added: “Some conventional projects already compete with US tight oil. World-class discoveries in Brazil and Guyana, for example, which have giant reserves and high-quality reservoirs, have project breakevens lower even than most tight-oil plays. In other, more mature sectors, such as the US Gulf of Mexico or the North Sea, operators have made great progress in bringing costs down and lowering breakevens.”

Maintaining however that this new competitiveness came at the expense of volumes. Recalling that Wood Mackenzie’s 2014 50/50 production supply mix forecast between conventional projects and US Lower 48 tight oil was defective as the US Lower 48 has dominated, making up nearer 70% of new volumes.

Mr. Paton said: “Production from conventional pre-FID projects today will be considerably lower than Wood Mackenzie’s pre-price crash forecasts. The key driver is the large number of projects which have fallen completely out of the picture because they are uneconomic and have been delayed or cancelled.”

He added: “Many projects now in the mix have been changed in scope. Operator mentality has shifted to ‘value over volume’. This brings significant cost savings, but takes a chunk out of production for many assets.”

Raising therefore two key issues which do not exclude rising cost of supply and a potential supply gap, resulting from both declining legacy field production and a projected growth in demand.

Wood Mackenzie believes the cost of supply is set to increase as future production will be sustained by higher-cost (>$60/bbl), non-OPEC sources.

The analysis further suggests that low-cost OPEC capacity growth will not be able to meet the gap created by declines in higher-cost, non-OPEC volumes. This higher-cost production is also likely to precipitate an increase from 1.7 million b/d in 2017 to 5.3 million b/d in 2027. And by 2035, these volumes should reach 9.2 million b/d.

Mr. Paton said: “Wood Mackenzie calculates that non-OPEC conventional onstream declines stabilised at around 5% in 2016. Our analysis suggests they will stay at this level through to 2020 before increasing to historic norms of 6% per annum.

“Combine this with demand growth of around 8 million b/d and the resultant supply gap is around 23 million b/d in 2027.”

Filling this gap says Paton are volumes produced via US Lower 48 future drilling and pre-FID projects. “This is the key” he said. And these are the future marginal cost barrels which will play an important role in setting the price over the next decade. Of course, the Lower 48, in particular, he says, will emerge as an important marginal barrel producer.

“When you look at the numbers in terms of total production, our research suggests the US Lower 48 will be one of the most expensive sources of supply in 2027,” Paton said. “The cost of tight oil will rise as higher-cost new drilling is required to offset declines as core, sweet-spot acreage is drilled out. This contrasts with conventional resource themes which benefit from longer-life assets providing a relatively cheap, stable base of production.”