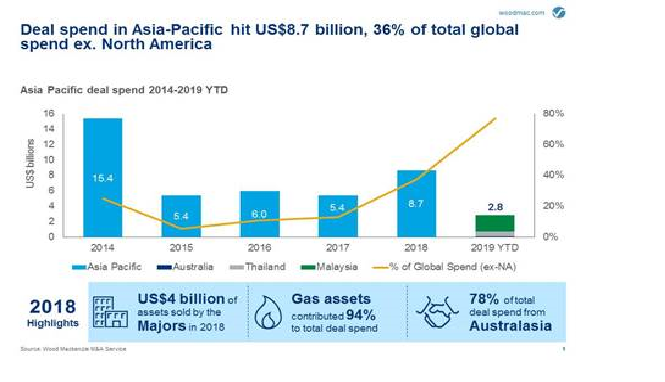 Upstream M&A in the Asia-Pacific region is off to a strong start this year, with US$2.8 billion worth of deals already announced in the first quarter of 2019, says Wood Mackenzie team. This according to them will include Murphy Oil’s US$2.1 billion divestment of its Malaysia business to Thailand’s national oil company (NOC) PTTEP. Murphy Oil, with this departure, will now focus on its core positions in US Gulf of Mexico, North American onshore and Latin America.

Andrew Harwood, Wood’s research director has this to say: “We have observed for a while now the trend of oil Majors exiting countries in the region as their portfolios mature and contracts expire. Drawn to more commercially compelling opportunities elsewhere, Southeast Asia is also becoming a non-core region for large- and mid-cap international oil companies (IOCs)”.

He said the Asia-Pacific upstream deal spend hit US$8.7 billion last year, accounting for over a third of global spend (excluding North America), attributing the increase in activity primarily to a reshuffling of portfolios in Australia and New Zealand. He however added that the Southeast Asia was also set to feature more prominently in 2019, with more than 5.4 billion barrels of oil equivalent (boe) of predominantly gas assets potentially coming to market.

He said the 2019 M&A potential would also be driven by regional NOCs farming down assets to bring in technical and financial partners to manage newly-expanded portfolios, alongside retrenchment by traditional E&P players.

He stated that two of the region’s biggest portfolio owners, PERTAMINA and PTTEP, would spend a collective US$32 billion over the next five years to maintain their domestic supply outlook.

“Pre-development projects that been stalled during the oil price downturn is also another theme for smaller players and new entrants to take note of. As economic conditions improve, there could be new owners and new capital looking to monetise these assets,” added Harwood.

Harwood’s worries, with the region’s M&A stakes that had gone high therefore was, Who would be the potential buyers?

He further said: “The M&A bear view would be that there is a smaller universe of potential buyers, but we think regional NOCs, Middle Eastern operators and regional specialists, continue to be active players shoring up assets in Southeast Asia.