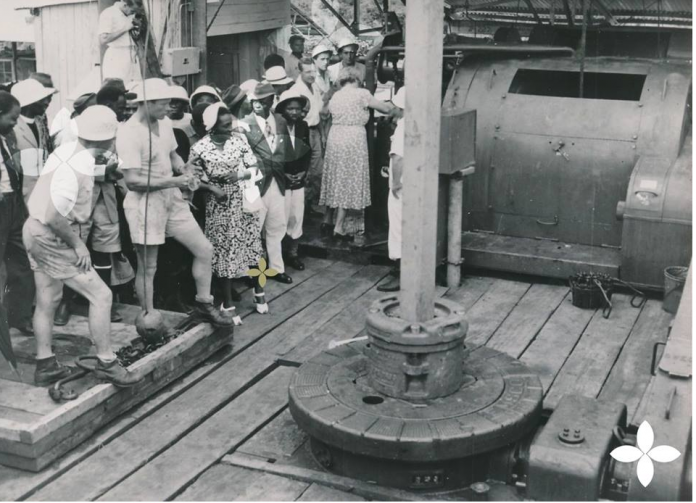 June 2020 would be about 64 years since oil exploration and production activities began in commercial quantity in Nigeria. The entire volume of this operation was and still is within the mangrove swamp of Nigeria, a territory categorically referred to as the Niger Delta. This area is a contiguous network of meandering channels and tributaries which form the estuaries of the River Niger into the Atlantic Ocean. The area covers a land mass of 70, 000 square kilometers. It enfolds nine of the 36 states in Nigeria, houses about 1600 communities made up of about 45 million people, (Nigerian Population Commission 2006), and all speaking about 250 languages. This mangrove is in effect the largest in Africa, and counts among the first three in the world.

The first oil exploration license was acquired by Shell BP, then Shell D’ Archy in 1938, but it was in 1956 that the first major commercial reserve was discovered at Oloibiri, in present day Bayelsa. Two years later, Nigeria entered the global oil market as a crude oil exporter with a production volume of 6, 000 barrels per day, approximately about 1.2% of Nigeria’s foreign exchange earnings, (figure based on Nigeria’s production quota as at then). Today Nigeria is about number six on the global map of oil producers, and about the eight largest exporter of crude oil in the world, with a production quota of approximately 2.4million barrels daily, until the coming into effect of OPEC’s production cut aimed at increasing and stabilizing oil market price.
Crude oil accounts for about 80% of Nigeria’s foreign exchange, and more than 70% of her GDP. Of Africa’s reserve of about 60billion barrels, Nigeria accounts for about 35%. This is the perspective of oil mineral in the oil-rich Niger Delta region of Nigeria.

The issue of development is generic to the Nigerian situation. Since independence, the issue has been a recurrent debate, both at home and among Nigerians abroad. And many have challenged the avowed dividends of self government which the founding fathers of the Nigerian region promised on the assumption of independence in 1960; of course little they may have understood that by clamouring for freedom they were also calling for responsibility. On the literary front, a corpus of literature has been produced. Popular Nigeria artists have criticized extensively what they have branded as betrayal of the polity by the home-breed politicians. Late Professor Chinua Achebe had, in his Things Fall Apart, Arrow of God, and No Longer At Ease, taken a constructive swipe on the dislocations of the integral popular psyche through correctable self limitations, character-trait. These idiosyncrasies and character dislodgements remain the projections of Anthills of the Savannah. These have turned the creative and inimitable social construct into a cauldron of corruption, and societal paralysis.

The Niger Delta is still peculiar in the aggregation of the over-rider of developmental inertia that has characterized the Nigerian state. This also constitutes a major reason why various media analysts and social commentators could easily refer to the Nigerian state as a ‘failed state”. The issues of the Niger Delta, from all indications, are issues of unjust actions, violent reactions and trial solutions, since about sixty-four years of massive oil and gas exploration.

Willinks Commission was the first initiation in the region, charged with a responsibility to carry out detailed research on minorities’ rights and fears, within the constituted federated state called Nigeria. It was set up in September 1957 by Rt. Hon. Alan Lennox-Boyd, MP and Secretary of State for the Colonies. The Commission sat between November 22 1957 and April 12 1958, in the three regions. Its terms of reference among others included:
. To ascertain the facts about the fears of the minorities in any part of Nigeria, and to propose means of allaying those fears, whether well or ill-informed;
. To advise on what safeguards should be included for this purpose in the constitution of Nigeria;
. If but only if, no other solution seems to the Commission to meet the case, then as a last resort to make detailed recommendations for the creation of one or more new states, and in that case,
. To specify the precise area to be included in such state or states;
.To recommend government and administrative structure most appropriate for it;
.To access whether any state so recommended would be viable from an economic and administrative point of view, and what the effect of its creation would be on the region or regions from which it would be created, and on the federation.

In Chapter 14 of its Report, the Commission recommended among other things, that a Council be set up for the Minorities of Benin and Calaber Provinces. This constitutes the bulk of present day Niger Delta. Its duties include to “foster the wellbeing, cultural advancement and economic and social development of the Minority/Area, and to bring to the notice of the Regional Government any discrimination against the Area.”

One year after independence, the government at the centre established the Niger Delta Development Board as the first agency in line with the recommendations of the Willinks Commission, charged with the responsibility of driving the development program of government in the area. This incidentally happened three years after Nigeria entered the global market as a crude oil exporter, and a year after she joined the comity of independent nations. But for “poor conception, weak drive and lame impact”, the agency was replaced in 1976 by the Niger Delta Basin Development Authority whose drive was more in line with agriculture, and of course the impetus of OFN of the Murtala cum Obasanjo’s regimes. This body later became the Niger Delta Basin and Rural Development Authority.

In 1981, the Federal Government set up a Presidential Committee to administer the 1.5% Mineral Producing Areas Development Fund. It was the vogue of the then Shagari-NPN-led government. …And the story of Commissions continued until the emergence of the Niger Delta Development Commission, NDDC.
Established by an act of legislation in July 2000, the Commission has a board made up of a member each from each state of the nine oil producing states of the Niger Delta region which includes, Abia, Akwa Ibom, Bayelsa, Cross Rivers, Delta, Edo, Imo, Ondo and Rivers state, 3 persons representing the non-oil producing communities, a representative for the Oil Companies, one each for the Federal Ministry of Finance and the Environment.

Others include,
. To tackle ecological and environmental problems that arise from the exploration of oil minerals in the Niger Delta area and advise the Federal Government and the member States on the prevention and control of oil spillages, gas flaring and environmental pollution;
. Liaise with the various oil mineral and gas prospecting and producing companies on all matters of pollution prevention and control;
. Execute such other works and perform such other functions which in the opinion of the Commission, are required for the sustainable development of the Niger Delta area and its people; and
. In exercising its functions and powers under this section, the Commission shall have regard to the varied and specific contributions of each member States of the Commission.

With so many directorates under it, the Act further recommended funding for the Commission by the Federal Government the equivalence of 15% of the total monthly statutory allocations due to member States of the Commission from the Federation Account, this being the contribution of the Federal Government to the Commission;
. 3 percent of the total annual budget of any oil producing company, onshore or offshore of the Niger Delta Area, including gas processing companies;
. 50 percent of the money due to member States of the Commission from the Ecological Fund;
. Such monies as may from time to time be granted or lent or deposited with the Commission by the Federal or a State Government, any other body or institution whether local or foreign;
. All monies raised for the purposes of the Commission by way of gifts, loan, grants-in-aid, testamentary disposition or otherwise; and
. Proceeds from all assets that may, from time to time accrue to the Commission.
In terms of scope, the Commission offered the widest outreach, and in terms of funding, it created the biggest purse, and of course in terms of controls, it offered the best safeguards against failure, all because it was the first comprehensive attempt by government to address the perennial regional problem of the area. Besides, the Act establishing it brought into perspective several years of frustrations and failures of development intervention agencies, and leaning upon those lapses, recreated a framework for an agency that was adjudged much broader in space and most accommodating in policies.

With this development, hope was high that the Niger Delta question has been addressed at last. That the Federal Government has stopped playing the coy mistress, and has firmly taken its position as the responsible Man-of-the-house. But this was not to be. Like the wanton boys to the angry gods the youths rose to the occasion, their goose being that they have been surcharged. The funding ratio was a far cry to the total resource control they clamored for. But that was then.

Power must and has truly changed hands. That is what is more worrisome unfortunately. The tendency to steal among political office holders has grown in strength and widened in radius, and under a regime that was meant to promote meritorious leadership at all cost. And it goes with a price to ask salient questions as to why mediocrity and patronage governance should ride over merit, and for five good years down the line many would say.

The drama of allegations and counter allegations of missing monies running into billions of Naira earmarked for development in the Niger Delta was a classical script of some sort. Nigerians and indeed the world at large truly had a field day watching – the intensity and intrigues, as well as the innuendos and vituperation – of course one can always trust the national assembly of Nigeria for its dexterity in matters of mediation and conflict resolution. Trust them equally, at least for selfless service, effective representation and independent probes, the records are there for anyone who cares.

But for many also, the question is, how long before the long-awaited dream of developing the Niger Delta to meet the standard anticipated or envisaged by its patriots? How soon before a regime which thrives in patronage governance, baptizes get-rich-quick-syndrome, and widens the space for all its “Anointed” to circumvent laid down procedures become a story of the past? Or is the Niger Delta development question an endless script of surrogate and profligate governance which basks in the euphoria of hybrid manipulations and bare-faced criminality, with stage-managed, wasteful and fruitless probes to cover the tracks and provide safe landing? And how long before the teenage-styled governance is laid to its final rest, and the reminiscences of deliberate political insurgency of the recent years relegated to the lumber room of history? Is your guess as good as mine?