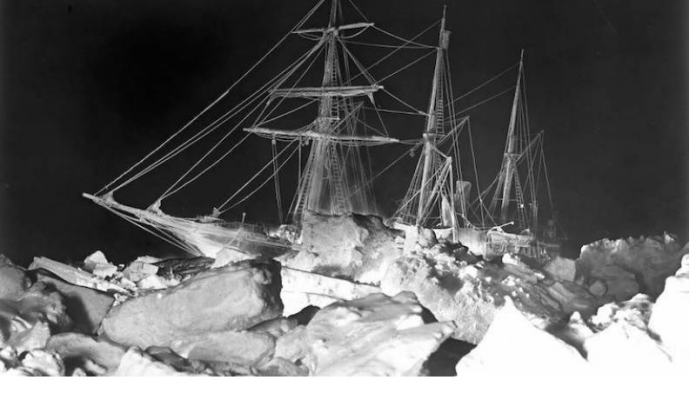 A South African icebreaker has departed the country in search of Ernest Shackleton’s ship Endurance, which sank off the coast of Antarctica in 1915 after being slowly crushed by pack ice.

“The Falklands Maritime Heritage Trust is pleased to confirm that the Endurance22 Expedition, which is aiming to locate, survey and film the wreck of Endurance22 has departed on schedule from Cape Town, headed for the Weddell Sea in Antarctica,” the expedition’s organizers announced.

As part of the renowned polar explorer’s Imperial Trans-Antarctic expedition between 1914 and 1917, Endurance was meant to make the first land crossing of Antarctica, but it fell victim to the merciless Weddell Sea.
Just east of the Larsen ice shelves on the Antarctic Peninsula, it became ensnared in sea-ice for over 10 months before being crushed and sinking some 3,000 metres below the surface.
The voyage is something of a legend, due to the miraculous escape Shackleton and his crew made on foot and in boats.
The crew managed to escape by camping on the sea ice until it ruptured.
They then launched lifeboats to Elephant Island and then South Georgia Island, a British overseas territory that lies around 1,400 kilometers (870 miles) east of the Falkland Islands.
The South African icebreaker S.A. Agulhas II set off from Cape Town, Saturday morning with a crew of 46 and a 64-member expedition team aboard, including scientists from top international institutions.

“The preparation has been comprehensive, although not without its challenge, including COVID,” said Donald Lamont, chairman of the organizers. But “the team has remained nimble and determined and this has brought us to where we are today”. The expedition will last for between 35 to 45 days, with the vessel navigating its way through heavy ice and harsh temperatures. It hopes to find the iconic shipwreck with state-of-the-art technology and explore it with two underwater drones, and also undertake scientific studies which could help further knowledge around ice conditions and climate change. But the journey will be a difficult one.

The Anglo-Irish explorer himself even described the site of the sink as “the worst portion of the worst sea in the world.”
The 144-foot-long ship sank in the Weddell Sea, which has a swirling current that sustains a mass of thick sea ice that can cause problems even for modern ice breakers.
It is one of the hardest parts of the ocean to navigate.
Endurance22’s director of exploration, Mensun Bound, said in a statement that his team “very much hope we can do justice to this magnificent chapter in polar exploration”.
If they do find it, it will be left untouched but they will do a 3D scan of it and broadcast it in real-time.
Despite the optimism, there is no guarantee the 110-year-old ship will be located.

“In terms of shipwreck challenges, it is the most difficult,” David Mearns, one of the world’s leading shipwreck hunters, told AFP. “You won’t get any more difficult than this because of the ice conditions”.
Source- The Guardian.