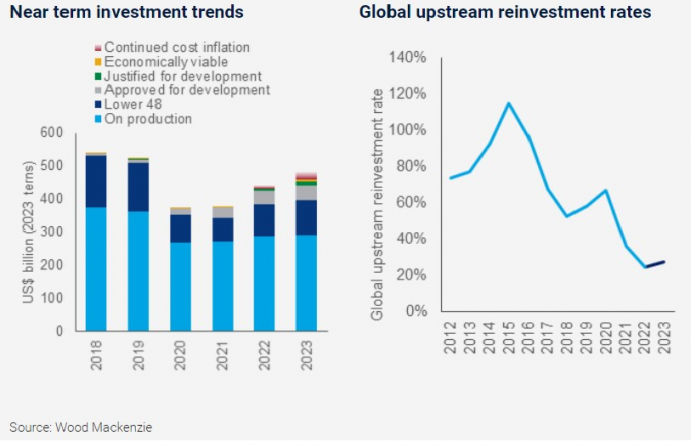 With the confusions arising from Covid-19 pandemic, the Russian-Ukrainian war, the recrudescence of energy security warfare amongst countries, and high inflation rates across borders, companies are looking for ways to navigate windfalls and the high inflations, and simultaneously increase investment responsibly, aimed at decarbonizing and developing new gas business models, says Mark of Wood Mackenzie who also said that inspite of the big strides oil and gas companies made in 2022, a lot more were on the horizon to make upstream oil and gas industry activities in 2023 more challenging than ever.

The key themes to determine this flow of industry activities in 2023 according to Wood Mackenzie’s Verisk business (NasdaqVRSK) report would include, navigating windfall taxes, restrained investment growth, cost inflation and changing business models for gas.

On windfalls and investments, the report showed that country risk had risen toward the top of the pile of investor considerations. Stating if prices move higher, more countries will take action in the form of price caps or windfall taxes, with operators would be expected to reassess current and new opportunities, even in countries previously thought to be low-risk.

“We will see many different approaches, from windfall taxes to relieve pressure on public finances, to incentives which accelerate oil and gas potential” said Fraser McKay, Head of Upstream Analysis at Wood Mackenzie. “Many of these actions will begin to reflect the energy transition aspirations of host governments. We advocate smart policies which provide both fairness and predictability, regardless of the prevailing price.”

Industry cash flow will also fall 9% to US$1.3 trillion in the year, while reinvestment rates (investment divided by operating cash flow) will rebound to 28%, up from an all-time low of 24% in 2022. It said development spending would increase, up at least 10% to between US$460 billion and US$480 billion.

“Investment needs to rise further in 2023 and subsequent years if supply shortages are to be avoided. But not by as much or for as long as many market observers think. And with corporate deleveraging largely complete, there is room for both incremental reinvestment and continued shareholder distributions. Who increases spend, where and by how much will be a much debated topic in 2023”, McKay said.

Cost inflation, in addition, is expected to constrain the impact of spend increases, and supply chain bottlenecks and inefficiencies will threaten the hard-fought gains made through previous downturns, with around half the global increase in spend consumed or subsumed, by widening supply chain margins.

On decarburization in upstream activities, governments and NOCs in the main producing countries are expected to marry low-carbon credentials with increasing upstream investment in the year, while IOCs looking to be part of Upstream decarburization process will need to demonstrate and disclose further emissions reductions capabilities.

McKay stated: “Regulations will compel companies to invest in measurement, monitoring and mitigation. Those that have already tackled the low hanging fruit will need to dig deeper – electrification and grid connection where it’s possible, dedicated renewables where it’s not. By the end of 2023 it will be extremely hard for mainstream operators to sanction projects without emissions mitigation plans.”

This also will further impact the gas business concept, as the European gas crisis and the consequential surge in price continues to dictate the pace at which upstream operators reassess their gas business models, with near-term investment considerations on how to raise domestic European production and new development concepts to unlock stranded gas become a major focus.

“We won’t see the industry spending more on gas than oil this year, but it’s clear that gas remains investible and will play an important role for upstream companies moving forward,” said McKay. “This year, operators will focus on making gas project returns more competitive with oil, while evaluating CCUS for high CO2 content fields and even blue hydrogen concepts.”